In the misty jungle of the Virunga volcanic mountains in Rwanda live one of the most elusive, magnificent and endangered creatures on earth – our close evolutionary cousin, the Mountain Gorilla. Close by, in dense bamboo forests, we find the charming golden monkey. And further south, in Nyungwe forest, live one of Africas largest populations of our closest relative, the Chimpanzee. During our six day tour across this small country in central Africa, we visited all of them in their natural and somewhat impenetrable habitats. Join us on our primate safari in Rwanda!

When we settled in our nice bungalow in Arusha at the end of our safari around Northern Tanzania, we had very little idea of how to proceed to arrange our visit to Rwanda. We had begun some research, but it was a bit difficult to figure out exactly who to contact and how to arrange all the necessary transport and permits needed for a safari into Volcanoes National Park, where the gorillas live. Usually people plan safaris like these months in advance from home, as permits to enter Volcanoes National Park are very limited – only ten groups of maximum eight people are let into the park each day.

We soon decided we would be better off finding some help, albeit more expensive. Luckily, the manager at Pamoja Lodge where we stayed in Arusha, Mr Boniface, was very nice and helpful, and as soon as we told him of our plans he offered his help. One quick phone call, and a couple of days later we met with Raymond from a small company called Kilele Afrika, and the process had begun. After almost three weeks, spent in Arusha and Nairobi, the plan was set. Visas had been obtained, an itinerary agreed upon and payments made. It may seem like a long time, but as they say: T.I.A. – This Is Africa. Things take time here.

The map abow shows our route and our stops on the safari. We start in Kigali and return there after a loop around western Rwanda. Zoom in and click the pins for details on each stop. 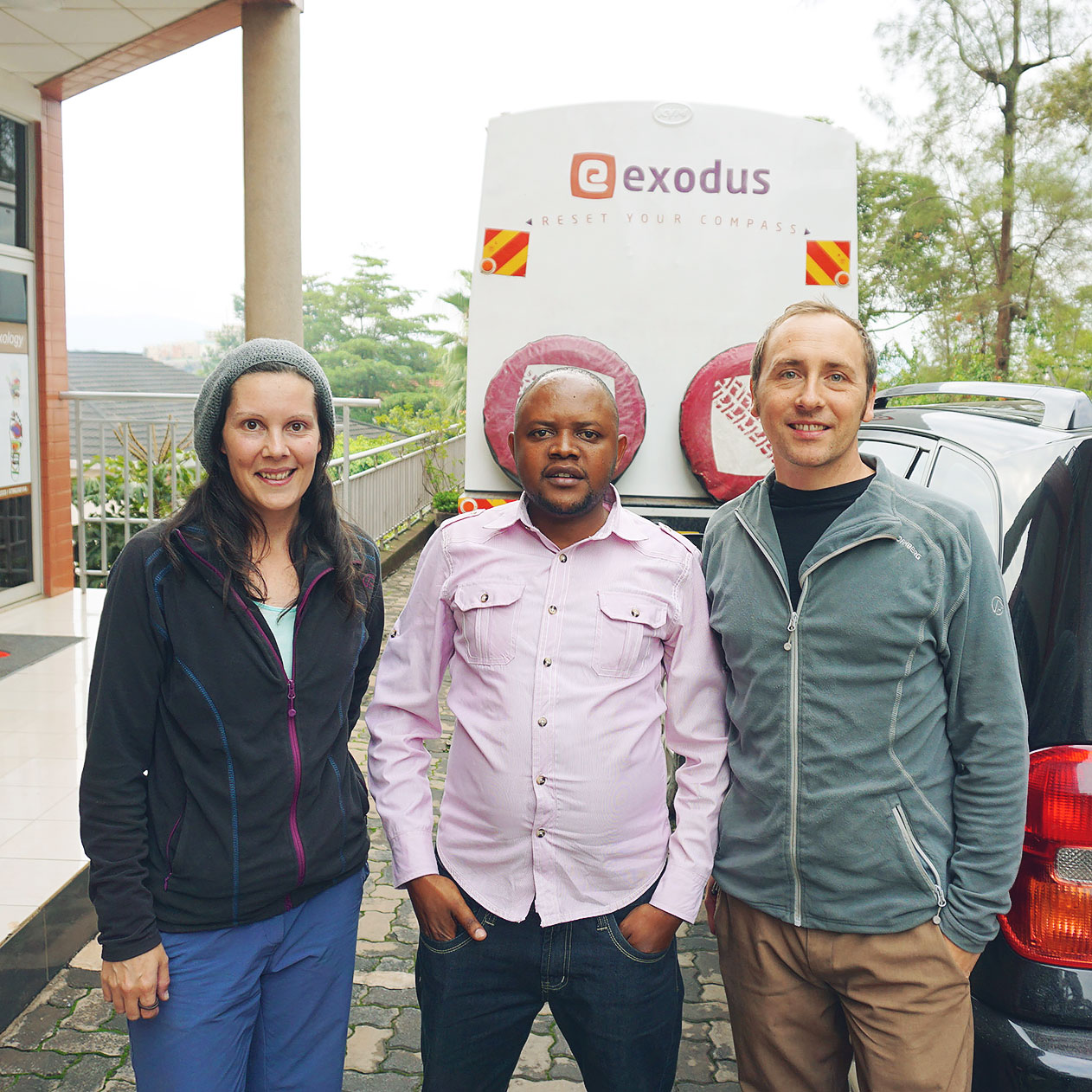 We began in the capital, Kigali, and set out towards the northwestern part of the country, where the borders of Rwanda, Uganda and The Democratic Republic of The Congo meet. Here, ancient volcanoes shoot up through the misty forest, their slopes creating a secluded habitat for the few remaining mountain gorillas of the three countries, as well as golden monkeys and other primate species and wildlife. We spent two full days in Ruhengeri by the Virunga Mountains, one trekking up the mountain foothills to find the gorillas, and one visiting the Golden monkeys in the lowlands.

From Ruhengeri we travelled for two days to reach our next destination. First south along Lake Kivu, stopping for one night at a nice resort by its beautiful shores. Then we took the long and curvy road that extend across the thousand green hills of the Rwandan countryside, past vast steep tea plantations and charming villages, to reach the home of the Chimpanzees in the forest of Nyungwe national park. A long but beautiful drive through this vast forest, and then north again, took us back to Kigali.

“Suddenly Alfred signalled to us to stop, the trackers had located the Gorillas not far from where we were. The excitement moved like a quiet wave through the group. Leaving everything behind except our cameras, we slowly and in complete silence made our way towards them. Then we saw him. Sitting peacefully between the bushes quietly eating leaves, was the unmistakable black and silvery back of a silverback Gorilla.” Join us as we go on an exclusive and unforgettable trek deep into the misty jungles of Rwanda to end up face to face with the mighty Mountain Gorilla.