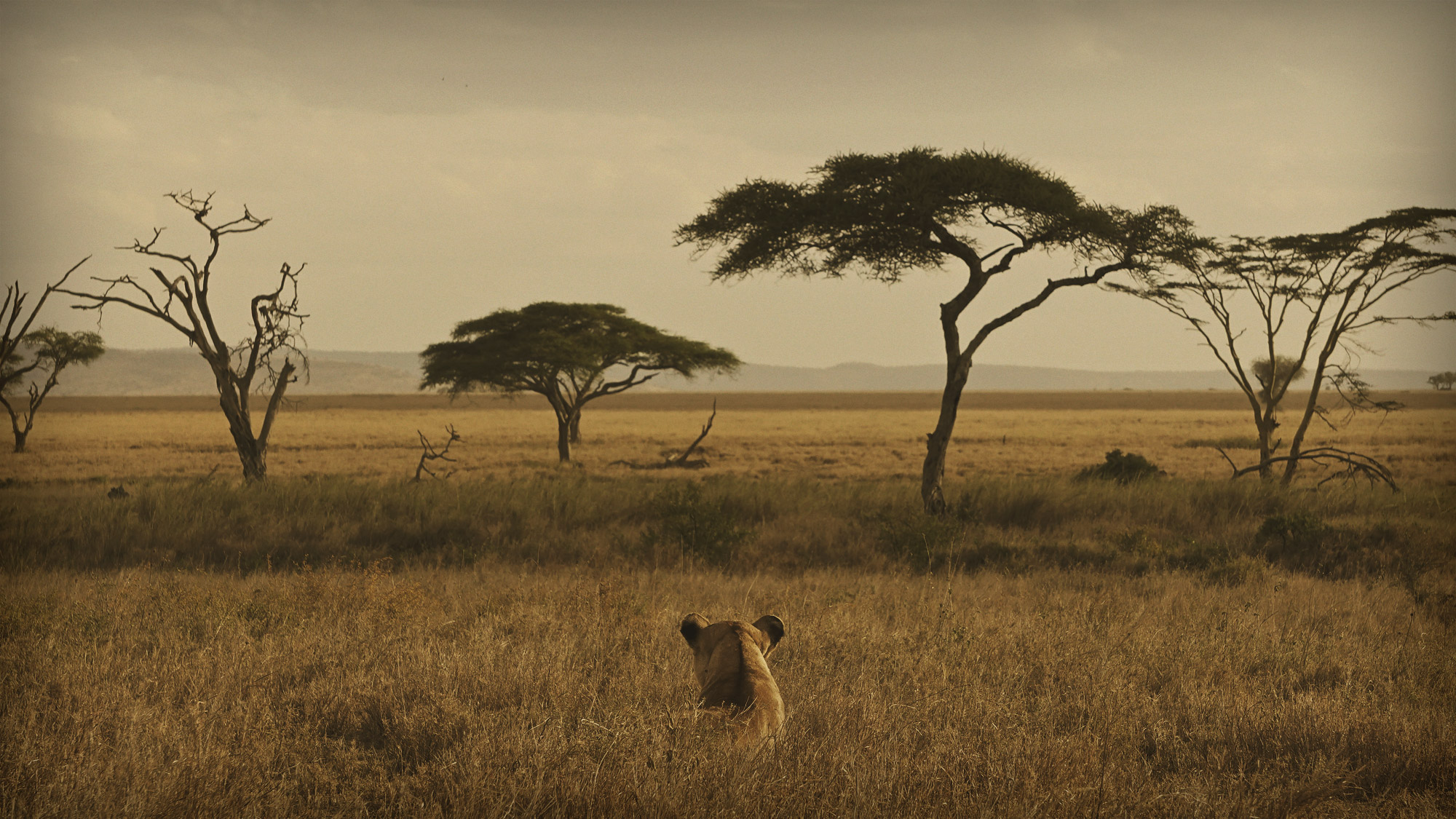 Into the heart of wilderness

On our third day in northern Serengeti we got up early for a morning drive, watched as vultures finished their wildebeest breakfast, and chased a Maasai cow herder into the woods before we headed south towards the centre of this enormous park. During the hundred kilometre drive we’d see a beautiful lion family, get up close and personal with a huge elephant, and be treated to a rare sighting of one of the savanna’s most beautiful big cats. 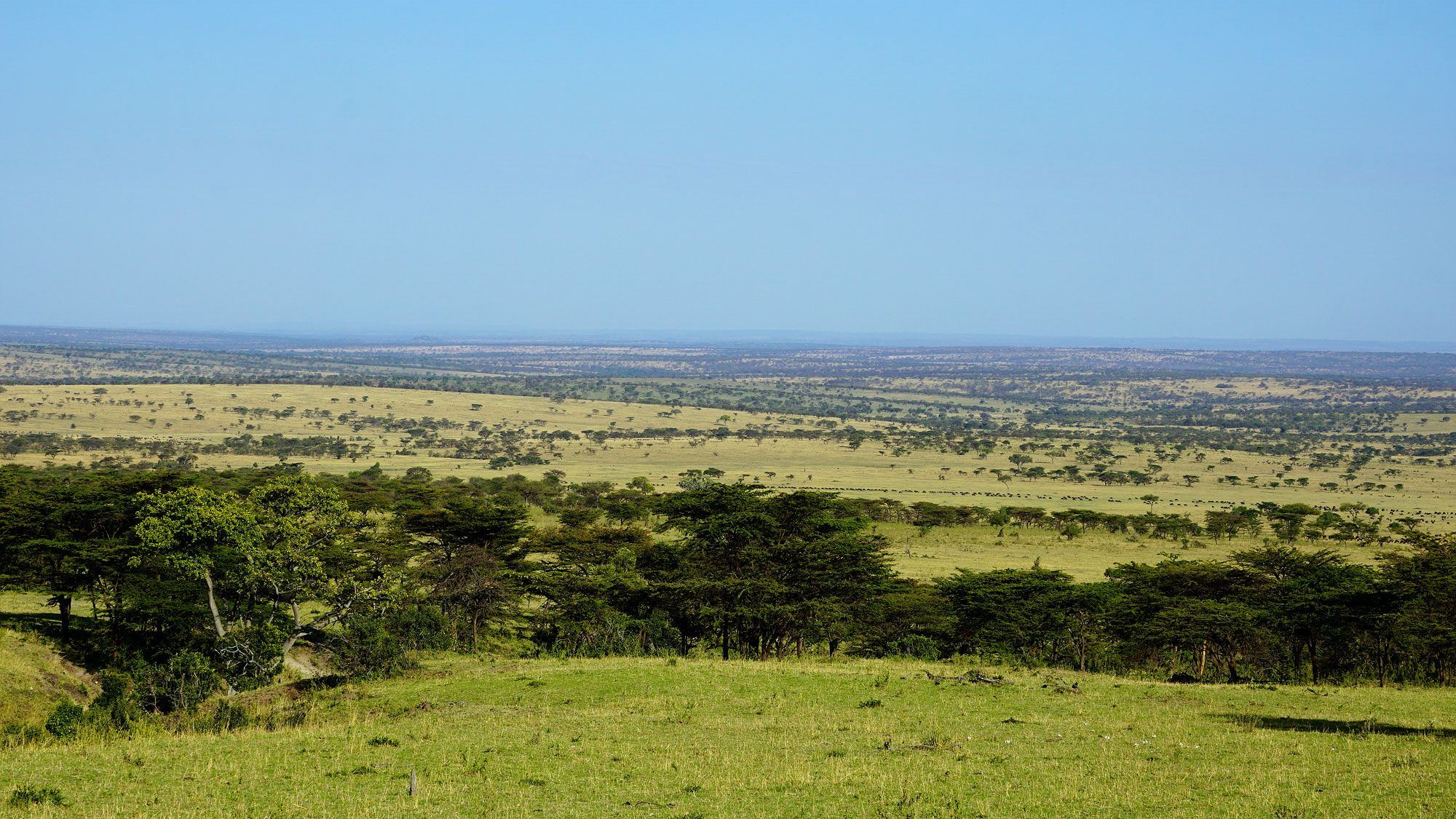 By 05:00 we set off in the sunrise to cover a different part of the area around our camp. Morning drives offer a chance to see another part of the life of animals, as some are more active while the air is still cool. The sounds of early birds and insects create an exotic sonic background as the landscape gradually emerges in the pale light of the sun. Soon we came across a group of vultures, frantically feeding on a fresh buffalo carcass.

When we stopped only a couple of meters from the dead animal, the vultures jumped back, but quickly returned to continue their bloody feast. It’s an eerie sight watching and listening as they squabble and fight for a place at the table, screaming and hissing at each other with dreadful noises. The biggest and scariest individuals eat first, sticking their long necks under the skin of the dead animal to reach their favourite meats.

It’s not pretty, but the vultures are very effective at what they do, and not much go to waste as they expertly fulfil their role as sanitisers of the bush. As we continued our drive we saw the usual suspects of the African plains; lions, cheetah, buffalo, zebra and a variety of antelopes. A pair of Secretary birds was a new addition, walking confidently across the grass with their unmistakable and long legged stride. 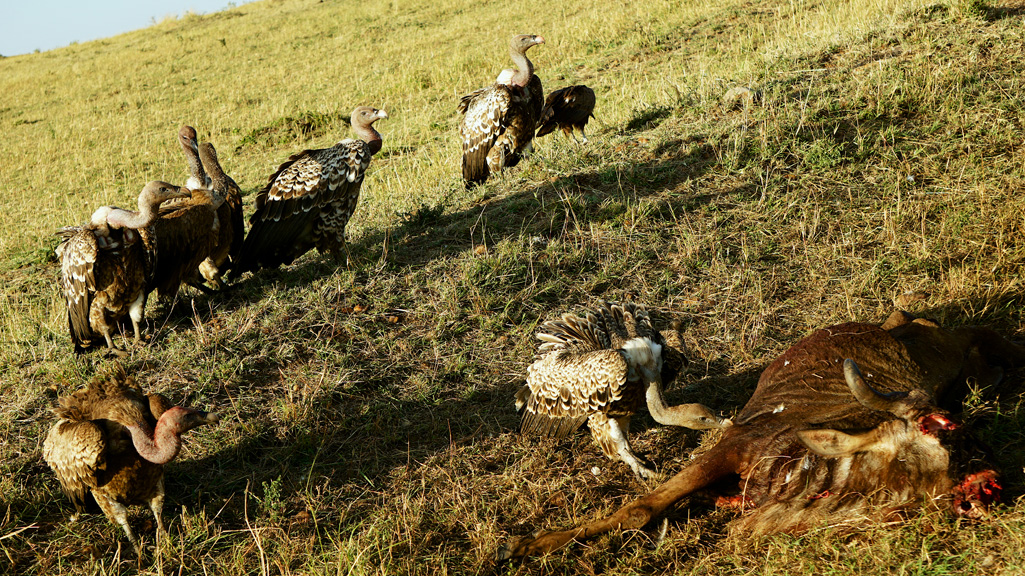 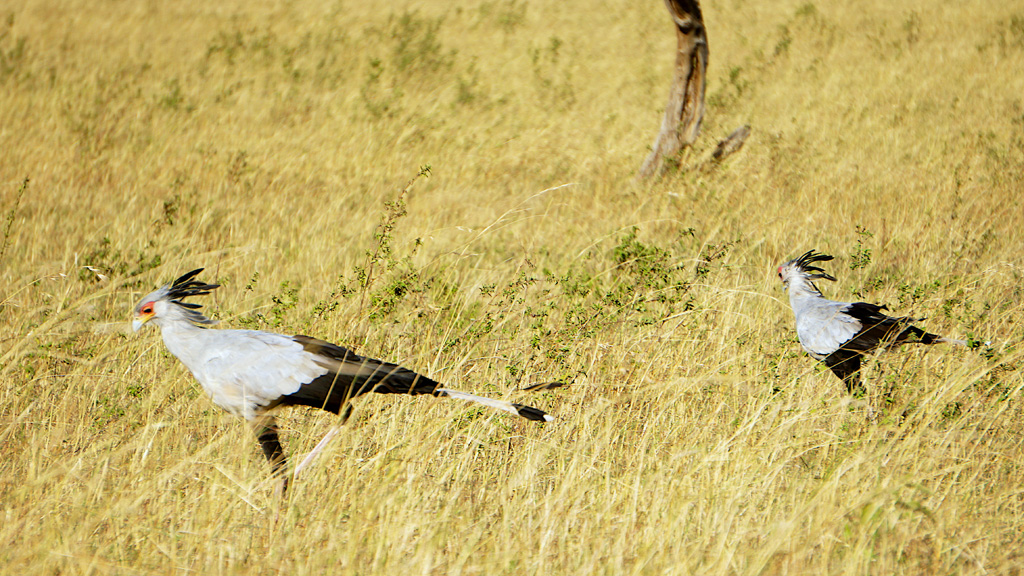 As we drove along a green hill, a long row of wildebeest appeared, marching majestically across the plain with a group of zebras in front. Wildebeest and zebra enjoy an effective partnership; they often move together with zebras in front, due to the zebra’s superior eyesight and the wildebeest’s great sense of smell, and their common interest in avoiding becoming lion food.

However, the most interesting spotting on this drive would be another, less exotic animal. A human, of the local Maasai sort. At first we saw four-five cows wandering the plains between a forested area and some hills. Perhaps they had escaped from a nearby village and gotten lost? Abbas was unsure, they seemed to know where they were going. One thing was for sure, unguarded out here they would not survive for long, a domesticated cow is easy pickings for any number of skilled predators, and due to risk of disease contamination it is strictly forbidden for farmers to bring their cows into the park. We started to move on, but then Beate saw something as she looked back. A figure in red peeked out from a hole in the ground some distance away, and then disappeared again.

Abbas stopped the car. After a moment the figure jumped out of the hole again and now the sight was unmistakable – the slender outline of a Maasai man in his traditional red robe. Probably thinking we might be rangers, he ran back towards the forest. And what a runner! Like only a Maasai can run, he moved quick and in impossibly long strides, stick in hand and his red robes waving behind him. We couldn’t help but laugh at the sight. “He knows he’s in trouble now” Abbas said, just before he suddenly accelerated the car, turned it around and started to pursue the offending cow herder. We drove fast, manoeuvring the bumpy grassland like only a high clearance 4WD vehicle can do, skipping and jumping as we closed in on the man as he too skipped and jumped towards the forest.

Then suddenly we lost him. Where did he go? We drove slowly closer, and then we saw him, peeking up from behind a mound where he tried to hide. He jumped up and continued his flight towards the treeline. The hunt was on again! As we closed in on him, he disappeared into the forest. But Abbas was determined, and navigated the car into the trees, zig-zagging between them in the direction the man was going. After a couple of minutes he gave up. The man was gone, or hiding, and we had better things to do. We watched as the cows wandered off, and based on their direction Abbas thought it likely that they were on their way towards a village on the other side, and that the man had simply decided to take a shortcut through the park. Either way, it was an unexpected excitement.

Beate suddenly said: “stop! There’s more”. And sure enough, as the angle improved and we could see through the tall grass, it became clear that the lion we first saw was only one of a whole pride.

After a quick brunch back in camp, it was time to leave Lobo, and start heading south into the heart of the park. The en-route game drive as we travelled the roughly 100 km to the centre of Serengeti did not disappoint, nor did the spectacular scenery. After about an hour we stopped at a waterhole and walked down to get a close look at some hippos. A couple of them were standing out of the water while many more were bathing happily in the shallow. Another hour later we passed a lion laying in the grass some distance away.

We could only barely see his head, so we only watched him for a moment before deciding to leave. After all, we had seen quite a few lions by now. But as we moved, and the view changed, Beate suddenly said: “stop! There’s more”. And sure enough, as the angle improved and we could see through the tall grass, it became clear that the lion we first saw was only one of a whole pride. Four adults and about six small cubs lay together, resting in the shade of a tree. A beautiful sight.

Only about ten minutes later, we could see a rather large collection of safari vehicles, parked close together around a big Acacia tree, and more were closing in on from around the area. Quite different from Lobo, we had now reached a more heavily visited part of the Serengeti, and safari cars were not so far between. The downside, of course, is that the crowd can get a bit annoying, and detract from the experience. But the upside is that you can be sure that when you see a car stopped by a tree, there’s something there of interest. And if you see ten cars in a cue, it’s probably a cat.

We drove up, and sure enough, under the tree sat a large leopard, wondering what all the fuzz was about. We were so amazed by the sight, we totally forgot about the crowds – there, right in front of us, was a leopard! Our first sighting of this magnificent animal, we were completely enthralled. He finally had enough of all the attention and with only a few big leaps, to the sound of “oohs” and “aahs” from the amazed spectators, he made his way up to a big branch where he lay down. We watched him with big eyes for a while until we reluctantly had to move on.

We continued along the gravelled road, and soon we came up to a fairly large elephant heading in the same direction. Abbas slowed down a bit as we passed him, and then stopped the car. We stood up to watch him from the open roof as he walked slowly towards us. He came closer and closer and became bigger, and bigger, and finally stopped just behind the car and stood there for a moment. “Is he touching the car”, Abbas asked, and then drove a few meters forward and stopped, as if to tease him.

We kept almost complete silence as the huge animal walked up to us again, stopped right next to the car a couple of feet from our eyes, and started sniffing the side of the car. Abbas and Rhama were giggling. “He wants the melon we have packed in the back” Rhama said. The elephant let his trunk slide along the side of the car sniffing the melon while we stood looking him straight in the eye. The elephant is a huge beast, but their deep dark eyes and their long eyelashes make them look amazingly kind and gentle, even up close. After a couple of intense minutes we moved on. 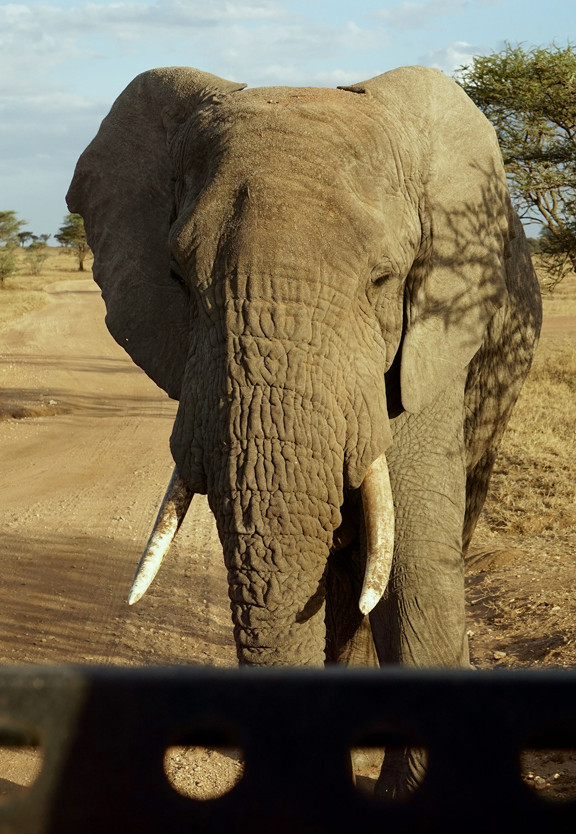 A deep feeling of contentment and excitement stayed with us as we raced across the sunburnt savanna towards our next campsite. The sun was low in the sky, the light was getting warmer, and by now the landscape had changed into the characteristically flat and endless plains that the Serengeti is so famous for. The majestical and wide open view that surrounded us seemed to perfectly complement and enhance our state of mind. The Serengeti is without doubt one of the most beautiful and scintillating places on earth, and we still had one more day to explore it the following day, when we would continue south through the park towards Ngorongoro crater..

The Serengeti ecosystem is a geographical region located in north Tanzania and extends to south-western Kenya. It spans approximately 30,000 km2. The Kenyan part of the Serengeti is known as Maasai Mara. The Serengeti hosts the largest terrestrial mammal migration in the world, which helps secure it as one of the Seven Natural Wonders of Africa and one of the ten natural travel wonders of the world.

The Serengeti is also renowned for its large lion population and is one of the best places to observe prides in their natural environment. The region contains the Serengeti National Park in Tanzania and several game reserves. Approximately 70 larger mammal and 500 avifauna species are found there. This high diversity is a function of diverse habitats, including riverine forests, swamps, kopjes, grasslands, and woodlands. Blue wildebeests, gazelles, zebras, and buffalos are some of the commonly found large mammals in the region.

See more images from Serengeti in the galleries 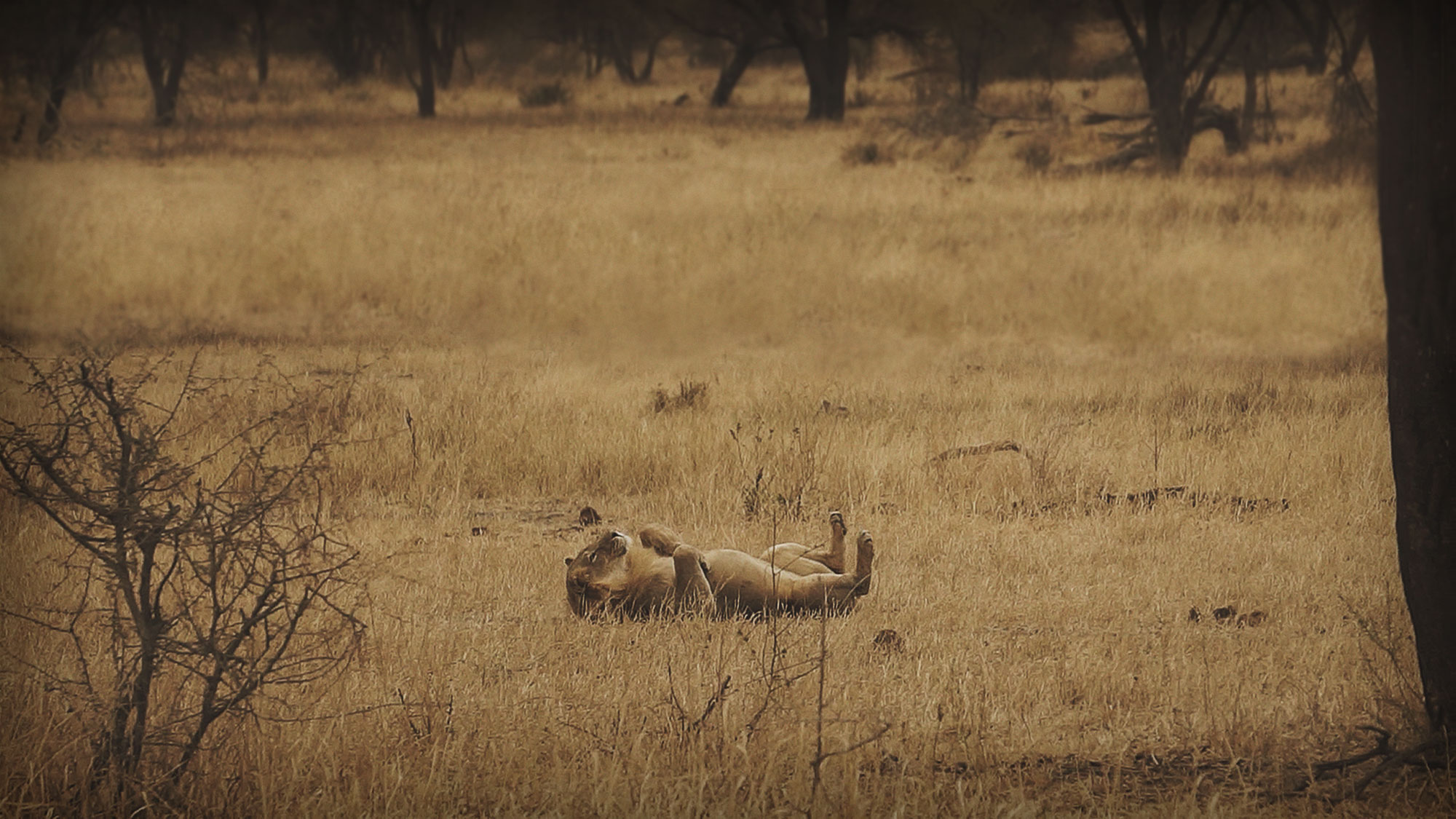