The story of us

The Story Of Us    Why We Travel

We’re Asle and Beate, two Norwegians exploring the world together. Here’s the story of how we met in Bangkok in 2000. How we got to know each other over Singha beers in the sleaziest strip joint in the Patpong District while the famous Sex On A Flying Motorsycle Show was being performed above the bar. How we started planning for a big trip around the world almost immediately, and how death and disease promptly intervened and forced us to put our plans on hold for several years.

Asle was on his way home after three weeks of island hopping in Thailand with three mates, doing the obligatory final pit stop in Bangkok stocking up on souvenirs and Sang Som (the Thai rum that has shown many backpackers a great time, but often relieved them of the ability to remember any of it). Beate was heading in the opposite direction and had just arrived in Thailand’s capital with a friend. Asle and said friend had recently been acquainted back home, and now we somehow found each other in the perplexing chaos of Bangkok.

We spent the day in Bangkok together, all six of us, sightseeing and talking about recent adventures and future plans. Later that evening the two of us got to know each other better in one of the pubs on Chao San Road where we hit it off instantly and talked for a long time. As the evening went on, the stream of Singha beer seemed to slowly boost our boldness, and the guys finally revealed their original plans for the evening: to witness first hand the darker side of the city. Soon we found ourselves in a taxi, racing through the hazy, sparkling streets of nighttime Bangkok towards the Patpong District.

This is how we ended up spending our first evening together in a strip joint in one of Bangkok’s most notorious neighbourhoods. The show on offer was just as advertised in our trusted Lonely Planet, in it’s weird and dull sleaziness, reaching it’s unmezmerizing finale as a huge Harley Davidson was lowered on wires from the ceiling above the bar, It’s two female riders wearing invisible biker outfits. But by now we were so deep in conversation at the bar that we only intermittently noticed the immorality that took place only a few feet away. 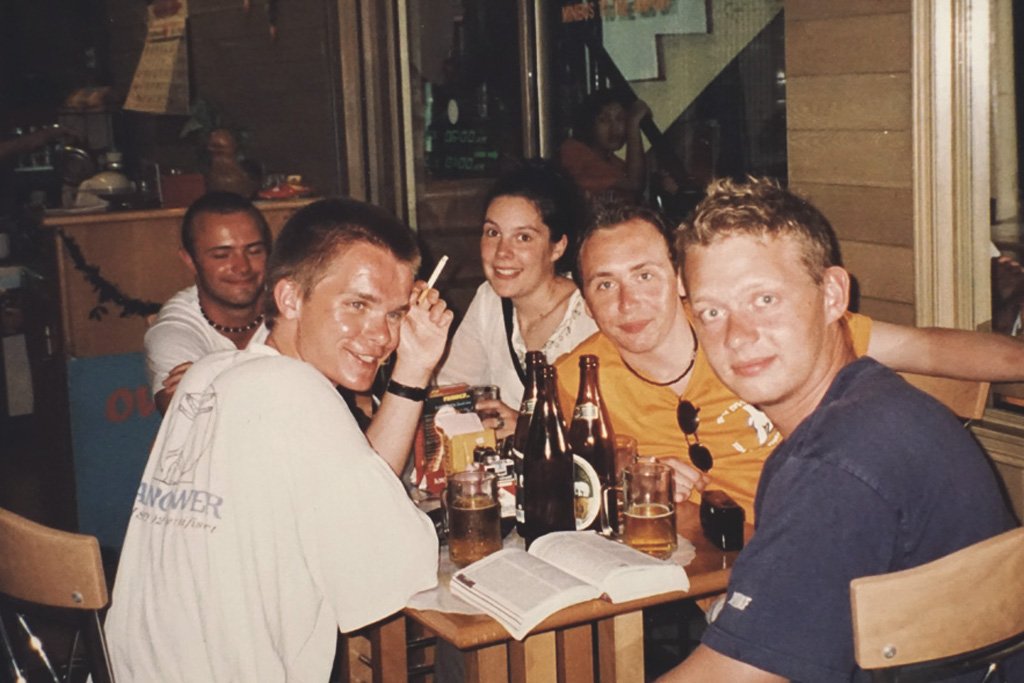 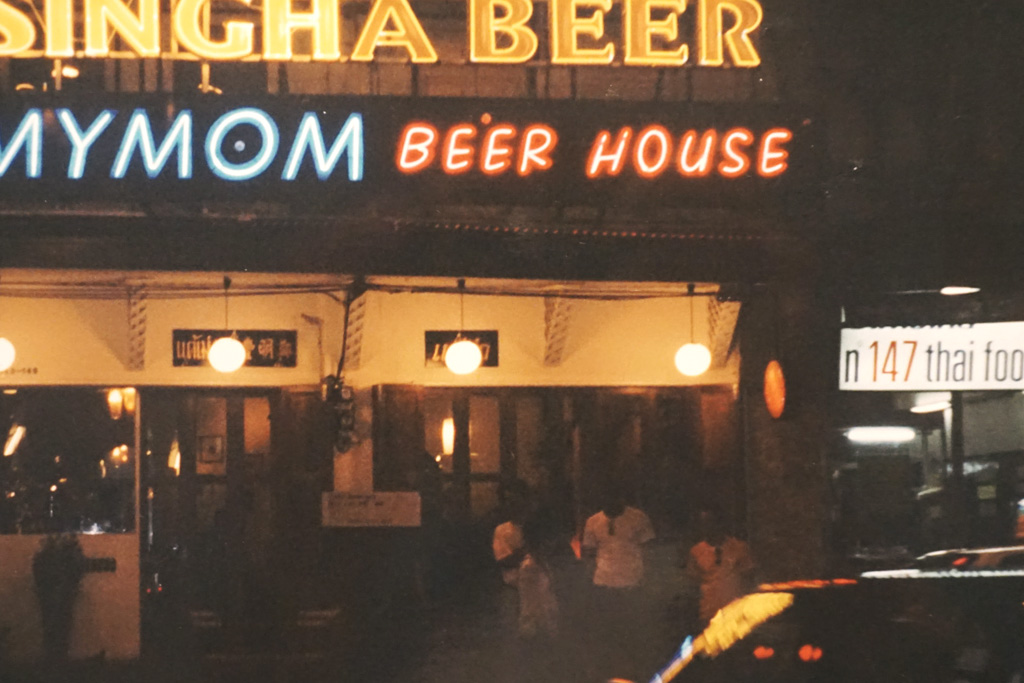 Happy Bangkok campers, us in the middle  /  The Mymom Beer House (Click images to enlarge)

Jazz, love and The Far Side

The next day the guys flew back home, while the girls continued their Thai adventure for one month. Back home we would later meet regularly with our now common friends, and Beate started showing up at Asle’s band rehearsals. Little did he know then of her thoughts as she sat in the room watching him play and sing, but she was already falling in love – and so was he. Every now and then we would walk from rehearsal to a popular club close by, where a local jazz-band held regular sunday gigs that always got the small but packed room in an insane frenzy. Later, that Christmas, we met in the same club to exchange Christmas gifts, and left the place officially a couple, sealed by our first kiss under a lamp post before we reluctantly had to go our separate ways. In Asle’s hand as he floated home was a gift-wrapped Gary Larson’s The Far Side calendar for 2001, and still, in one of our many boxes of memorabilia, is the page that marked our first year anniversary: December 22nd.

Our love of travel has taken us many places in the years since that day in Bankok, and we’ve had some great times and experiences together. We’ve been back to Thailand two times, backpacked Europe and visited our favourite city of Amsterdam frequently. In 2002 Beate spent six weeks in Tanzania on a student exchange program, and Asle joined her for the last two weeks. One week we spent chilling on the white beaches of Zanzibar, while the last week we went on a private safari in Selous Game Reserve. It was an experience we’ve never forgotten. Since the beginning we talked often about doing a long trip around the world. We started collecting notes on places we would like to go and things we’d like to see, and slowly prepared ourselves for what we thought would take place at least before we hit thirty. But it was not to be. In 2005 Beate’s stomach started acting up following two heavy rounds of antibiotics, and a series of unfortunate events was about to unfold. 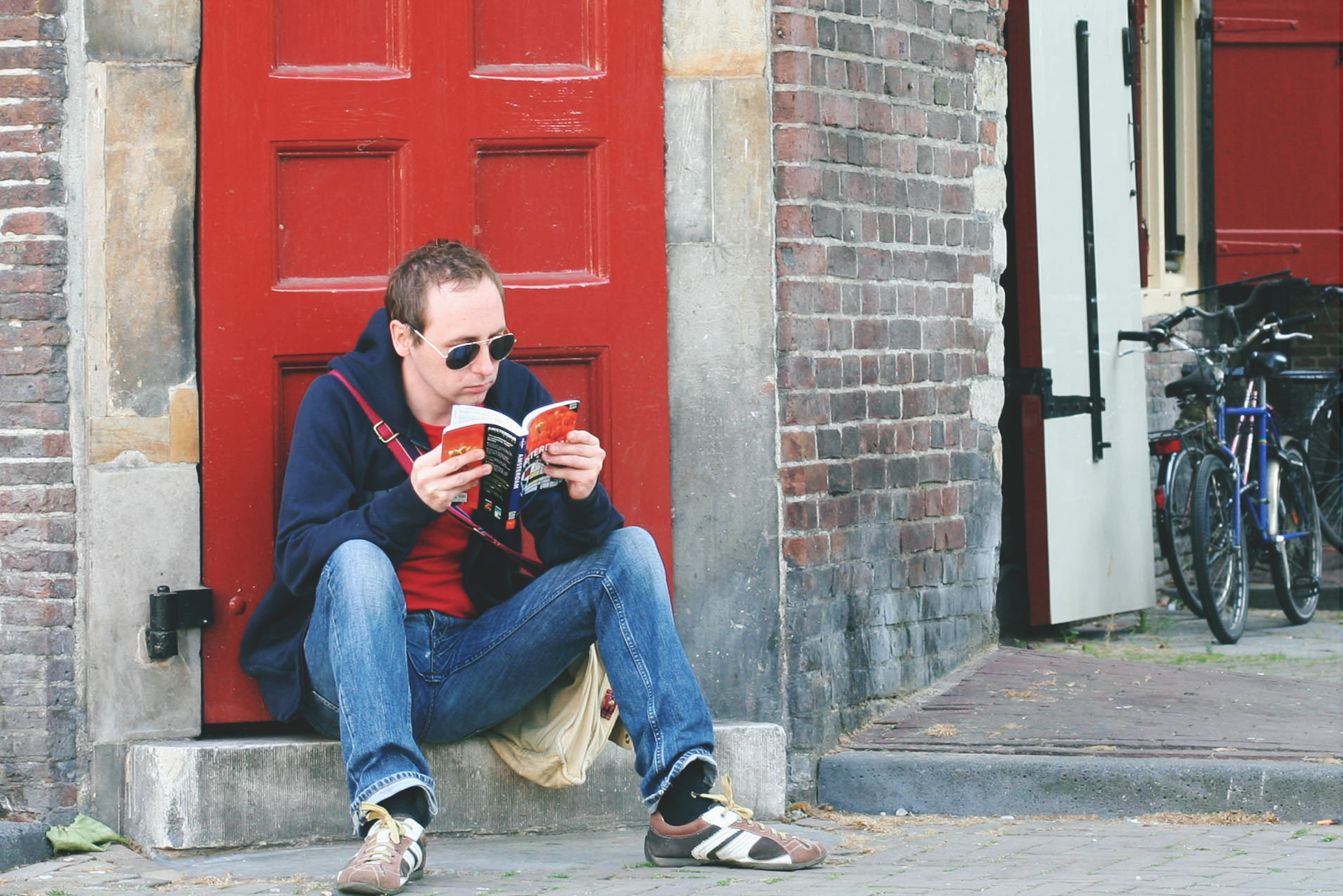 Later that summer, while vacationing at the family’s summer house in the south of Norway, Asle’s father died in a boating accident. Needless to say we were in shock, but the universe still had some surprises up its sleeve, and this was only the beginning of our annus horribilis. Just a couple of months later, Beate’s father passed as well, in another accident that had him freeze to death while staying in the north country (yes, it actually does get that cold up there). By now Beate’s health had improved somewhat, but now, probably due in some part to the stress of this period, her stomach problems came back with full force, this time leaving her paralysed by pain and discomfort, unable to eat proparly and finally unable to work.

In a few months that year, just as we were beginning to find the shape our life together, it felt as it was all turned upside down. All our dreams and plans had to be put on hold while we both tried to manage the day to day struggle of dealing with chronic illness and the challenges it brings with it. The disease made it impossible for Beate to live a normal life. The chronic nausea, stomach pains, nutritional deficiency, sleep deprivation and an almost total lack of a normal social life took it’s toll. At the same time she had to deal with the scrutiny and sometimes outright rudeness of doctors and public officials who were supposed to be there to help but were totally clueless, as well as the fear and uncertainty as to wether it would ever get better.

It obviously had an impact on our relationship as well. Asle tried to help in any way he could to make her day a little better – to be there when she needed it, and not when she didn’t. But hardest of all was to witness her struggle, and to be helpless to do anything about it, as well as dealing with the fear of losing the once vibrant and happy girl he fell in love with. As emotions ran high and nerves wore thin, we would often meet hurdles and challenges in our relationship for which we were ill prepared. After a gruelling year or so of testing by different doctors and hospitals, ruling out all known causes of her ills, it eventually became clear there was nothing the established medical community could do. With no diagnosis, and no cure in sight, we were left to our own devices.

A New Hope and a dream come true

Through hearing about similar situations from friends and family, and the marvel of Googling, we finally learned of a condition called Candida Syndrome, where the fungus Candida Albicans that is an important part of any human digestive system, grows unchecked and disrupts the body’s ability to properly digest food. The symptoms listed was a perfect match. We learned of private health institutions and nutritional specialists with knowledge of the syndrome who could do relevant testing and give practical advice. Finally there seemed to be hope. As soon as the diagnosis was confirmed, we at least had a mission, something to work towards, but it would not be easy and it would take time. After observing a strict diet for a couple of years, slowly things began to normalize, and in 2008 Beate felt good enough to start working part time again. Her strength restored slowly and in 2010 we did a test-run travel wise by spending 16 days in Thailand, and had a great time.

Finally we could start to think about our future plans again, and the big trip we’d wanted to do for so long. We had a few tough years, but the struggle we went through no doubt forced us to work on our relationship in ways we might otherwise not have, and we’ve come out the other end much stronger. In 2012 Beate was back to working full time again, and we started serious planning for a year long trip around the world to begin in the summer of 2014. We returned in July 2015 after 377 days of travelling around the globe (read more about the trip here). It was an unbelievable adventure that changed us forever, and one that left no doubt in our minds: this is what we really love to do, and we’re pretty good at it too. The world feels so much smaller to us now, and the rest of humanity so much closer. It’s a dreadful cliché, but the experience has made the Earth feel like our home in a very profound way, and we can’t wait to get back out to it. 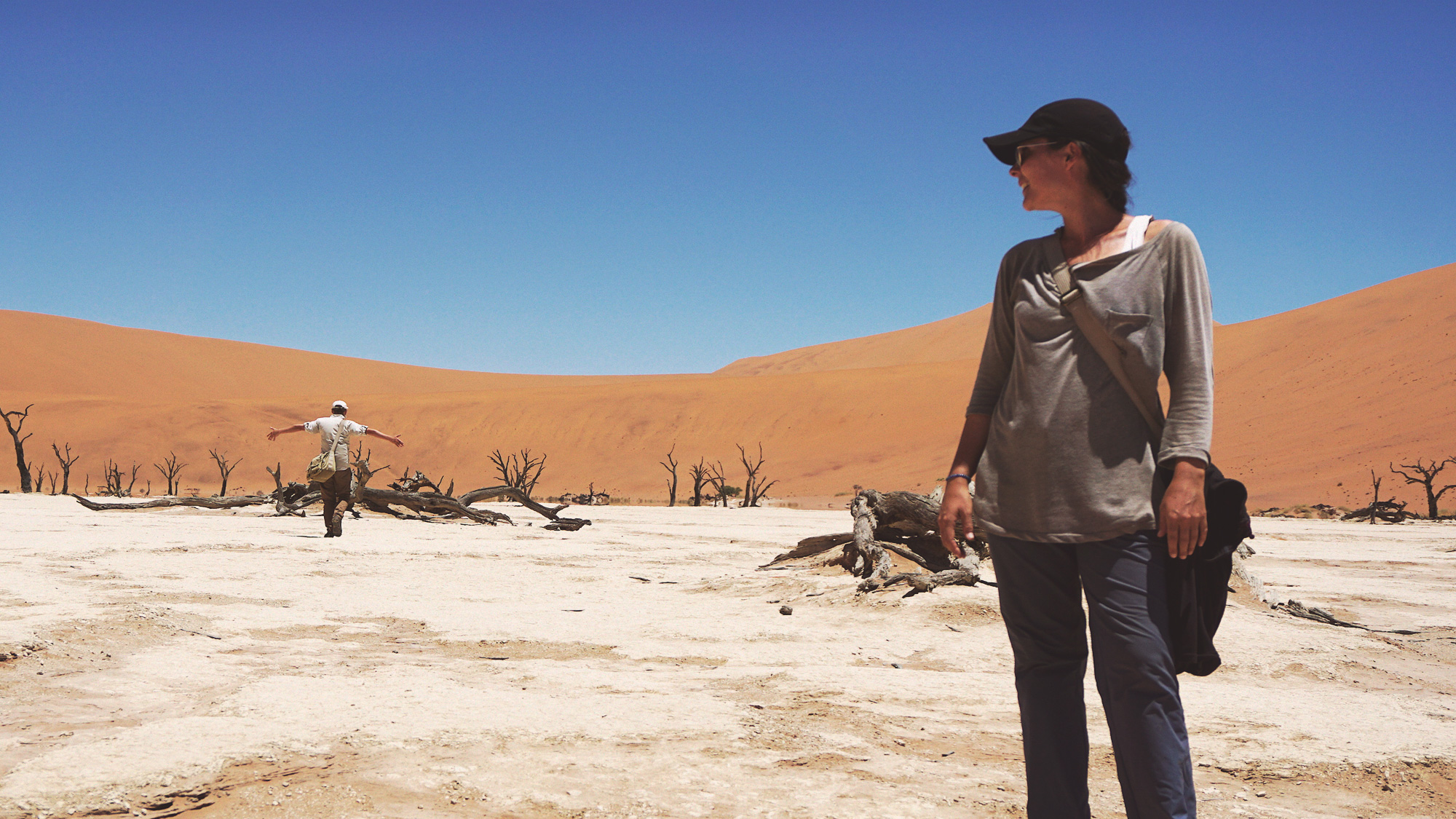